Home Comics and Books Book Review: “X-Files: Trust No One” Anthology Released…But Is The Truth In There?

Book Review: “X-Files: Trust No One” Anthology Released…But Is The Truth In There? 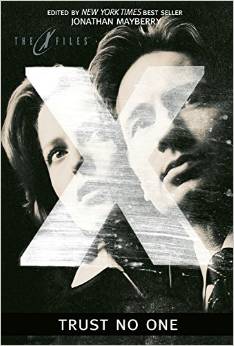 As someone who grew up on the X-Files, I feel a nostalgic pull any time I see pretty much anything with that distinctive logo stamped on the front. I’ve read most of the novels released during the show’s original run, all of the comics (both the Topps and current IDW series) and even collected the short-lived collectible card game with its crappy card design and blurry photos. I keep trying to set my DVR for the upcoming series relaunch on Fox, even though it tells me the show doesn’t start until January 2016. I’m one of the people shadow informant Deep Throat was talking about when he asks Agent Mulder, “Why are those like yourself, who believe in the existence of extraterrestrial life on this Earth, not dissuaded by all the evidence to the contrary?” Like Mulder, I want to believe, and I understand Mulder’s comment as he responds, “Because all the evidence to the contrary is not entirely dissuasive.” So when I happened to be in my local Barnes & Noble a few weeks back and saw the cover to a brand new short story collection, edited by Jonathan Mayberry, I was intrigued. At the insistence of my wife and fellow X-phile, (really, she had to push VERY hard to convince me…) I quickly plunked a copy of X-Files: Trust No One down on the counter and purchased it.

Previous novels focused on the show’s characters have been very hit and miss, with many more misses than hits. A show like the X-Files relies heavily on atmosphere and mood, and in addition the dialogue and interplay between the two leads has proven a challenge for authors to capture. I was hoping this collection would set itself apart – it features a number of excellent writers (Keith R.A. Decandido, Tim Lebbon, Max Allen Collins, Stefan Petrucha) and a few…just…writers (Heather Graham, I’m looking at you). It was also “authorized” by series creator Chris Carter as a lead up to the new series, undoubtedly to build upon the hype, so there was at least some chance he provided some direction and oversight into the stories. Needless to say, I cracked open the cover as soon as I could, ready to immerse myself once again in the dingy basement setting and dusty casefiles that signal the start of another adventure starring Spooky and Starbuck.

At first, everything went swimmingly. Tim Lebbon contributes an excellent story (“Catatonia”) that deals with a group of children who vanish from home, only to be found in the woods in a completely unresponsive state. It’s such a perfect set-up for an X-Files “monster of the week” episode that I could almost hear the haunting Mark Snow theme music as I read the first few pages. Set in 1994 (during the second season of the show), Lebbon scores extra fan points by bringing in a character fans loved to hate, the shady FBI agent Alex Krycek, and establishes a tone VERY similar to the one being used at the time, during the sophomore run of the show. It truly felt like a “lost episode” from Season Two. The next story, “The Beast From Little Hill” by Peter Clines, was more of the same – he presents an excellent set up (rumors that a gen-you-whine alien is running amok in a small town in Missouri), stages it in the early part of the show, and unlike Lebbon, even brings in a little of the trademark humor that would begin to infiltrate the show at the peak of its popularity as he pits rival small-town hucksters against each other (See the Little Hill alien — only $5 for 5 minutes of terror!) . I was reminded of one of my all-time favorite episodes from the show, Humbug.

However, I felt like things start to fall apart through the middle selections in the anthology. Paul Crilley offers a very poor send-up of Twilight (“Dusk”) that is one of only a very few stories set after the show concluded (either Carter preferred they focused on the early season timelines, or authors were hesitant to write anything too current in case the new show contradicted their writings). Unfortunately Crilley completely misses the mark. The story tries too hard to be clever (do we really need another Twilight spoof?), and doesn’t represent the characters correctly (Scully is much more of a believer in the latter part of the show, but in this story, she is back to her “I blinked and totally missed the monster running by me” mode while Mulder struggles to convince her that indeed they have encountered too many oddities for them to deny their existence any longer). “Sewers” (Gini Koch) and “It’s All In The Eyes” (Heather Graham) are two of the worst stories in the anthology. Both of those tales read like poor fan fiction, with Graham’s in particular falling into the territory where the fan attaches their personal sentiments to characters in their story. If you’ve ever read bad fanfic, you know the type: “He has such dreamy eyes,” thought Scully rapturously. “I wish he would just take me into his big, strong arms and let me press my face against his hairy chest.” While that’s not an actual quote from “It’s All In The Eyes”, the sentiment expressed is pretty similar. I guess I shouldn’t be surprised — while I haven’t read anything from Heather Graham before, I am familiar with the type of supernatural romance novel she writes and…well…it’s not my thing.

I had high hopes for Keith R.A. Decandido’s entry (“Back In El Paso My Life Will Be Worthless”). When he is on his game, he writes some of the best pop sci-fi fiction around. However, I found this particular outing to be very average at best. In his tale, Mulder and Scully are forced to work with a skeptical and derogatory FBI agent, the poorly named Jack Colt (with that christening, Decandido assured that his character would be right at home in a Clive Cussler novel, and I spent most my time picturing Emilio Estevez’ character from Loaded Weapon). Colt dresses Mulder and Scully down over and over, calling Mulder “whackadoodle” and a member of the dumbest graduating class in Quantico history. It all starts to feel a little out of place. We get it, Colt doesn’t believe Mulder and Scully are real agents and takes a dim view of the X-Files. In a different setting, this kind of portrayal (Mulder and Scully as viewed by an agent from another branch of the FBI) might make for compelling storytelling, but here it just feels forced.

This collection also needed a more careful pass in Editing. Several stories feature nonsensical time-stamps (in the vein of the show itself, which would frequently tag the location and time on the screen during the episode). On story, by Max Allen Collins, features a “2:23 a.m.” timestamp, and then cuts to Mulder buried in research at the local library in town. I don’t know about you, but I’ve never been able to drop by my local library at two in the morning to grab some study material about poltergeist. The very next paragraph is stamped as occurring around 4 a.m., but features Mulder and Scully sitting up talking about their day. Days of the week and months of the year fluctuate at random as well. In another story, the stamp sets the month as December and then immediately contradicts it from within the story itself, which mentions that it occurs in early November. One wonders if perhaps the timestamps were created after the fact in an attempt to give a common feel to each story and to adhere to the show’s tradition, and were not vetted by the writers at all.

As I closed the back cover to this anthology, I was reminded of latter seasons of the show. No longer “required viewing” by the eighth and ninth seasons, the X-Files relied on more and more outlandish premises to come up with new material, with eye-rolling dialogue and an overabundance of extra continuity to lend the false feeling of weight and importance. It became clear that the showrunners no longer had any sort of plan for the show. That being said, occasional gems would sift to the top (episodes like “Patience,” “Improbable” and “John Doe” come to mind). This disjointed anthology is a lot like that – a mixed bag of stories, some good, more than a little bad, with one thing in common – they all feature our favorite alien hunters. So, like the dutiful X-philes we are, we put up with the low points because the peaks remind us that somewhere beyond the clouds (or lurking in the sewers and other dark places beneath our feet), beings just outside our comprehension await to be discovered if we can only open our minds to the truth.

Book Review: “X-Files: Trust No One” Anthology Released…But Is The Truth In There? was last modified: January 28th, 2017 by Brandon Koontz
Featured
0
Facebook Twitter Google + Pinterest

As a kid, Brandon grew up on a steady diet of Spider-Man and G.I. Joe comics, and played way too much Faceball 2000 and Zelda: Link To The Past on his GameBoy. He forgot his nerd roots for a few years, but the G.I. Joe reboot around the new millennium drew him back into comics and geekdom at large in a big way. Now older, slower and less wise, he focuses his efforts on spreading the nerd bacteria to his beautiful wife and two amazing children every chance he gets.

Import Media: No Game No Life